Who do terrorist have nightmares about? 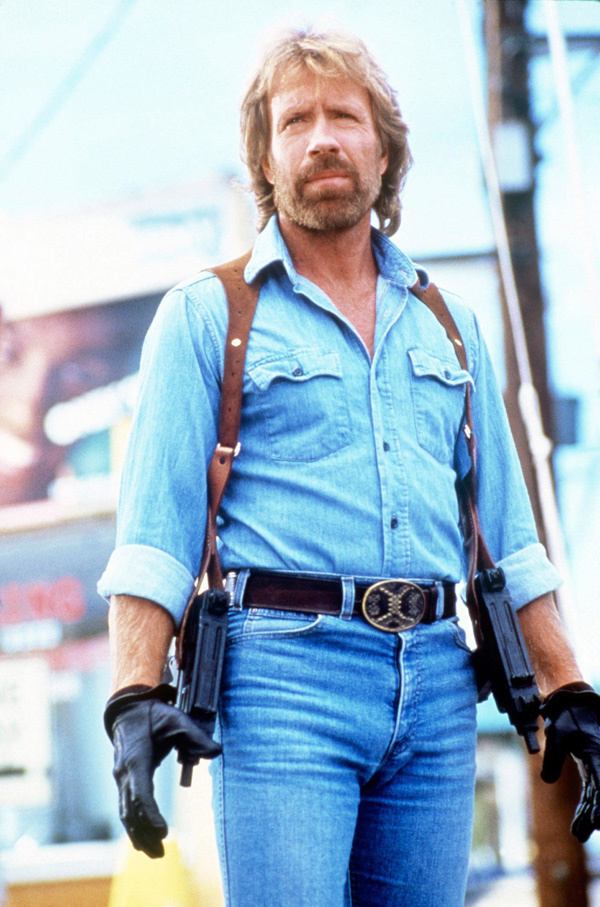 With the recent events in Belgium and France, and the nations battling terror around the world, I write this article with the utmost respect towards all countries, the families affected, and those who protect us and keep us safe from terrorism on a daily basis.  No, I’m not getting political in this review, but since Invasion U.S.A. deals with terrorism head-on (even if it’s in a Chuck Norris movie) I didn’t want to come across as unsympathetic towards the subject in my review of the Collector’s Edition Blu-Ray just released from Shout! Factory, and wanted to pay my respects to those who have made the ultimate sacrifice around the world.

Back in 1985 when Invasion U.S.A. was produced, there wasn’t the slightest thought that terrorism would hit the United States.  America had not seen a mass invasion since the war of 1812, even though the attack on Pearl Harbor was in 1941, Hawaii was not yet a state. America had thought their borders were secure from such an attack.  Even the tagline for Invasion U.S.A. reads: No one thought it could ever happen here…America wasn’t ready…but he was. 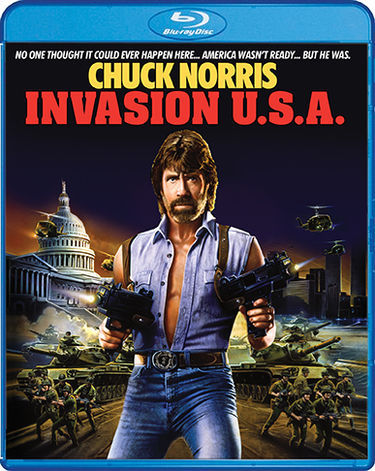 But the 1993 attack on the World Trade Center and later the 9/11 attacks changed America’s perception of terrorism forever.

It’s kind of strange to watch Invasion U.S.A. now and realize what is happening on the screen (though far-fetched; it is still an action movie and meant to entertain after all) is similar to the events that are taking place not just in America but in countries around the world as well.

As fun as it is to watch Invasion U.S.A. and recall the fond memories I had as a kid watching Chuck Norris dispatch as many bad guys as he could, I can’t help but feel a little sad that the world is actually facing a problem of this magnitude.

But with all that said, it should not deter you from enjoying the highly entertaining action flick with Chuck Norris at the height of his career. 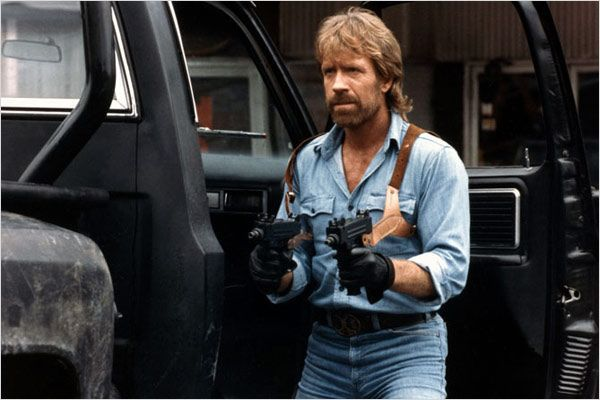 Invasion U.S.A. was Chuck’s second biggest box-office success, only second to Missing in Action which came out just the year prior.  Strangely, both of Chuck’s biggest hits were directed by Joseph Zito (The Prowler, Friday the 13th: The Final Chapter, and Red Scorpion) and produced by Cannon Films. 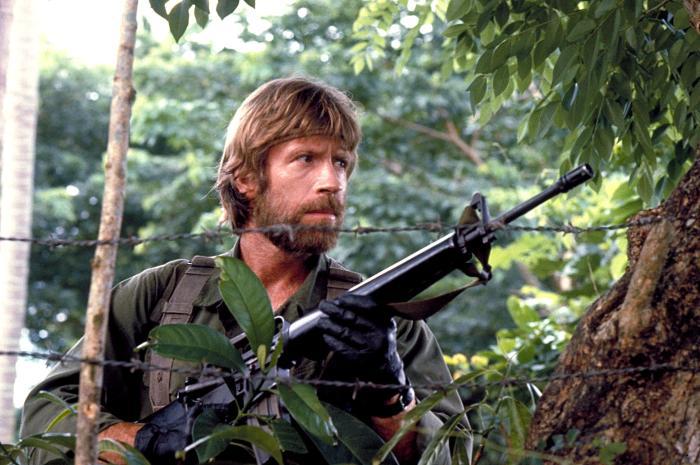 Chuck Norris in Missing in Action (1984) 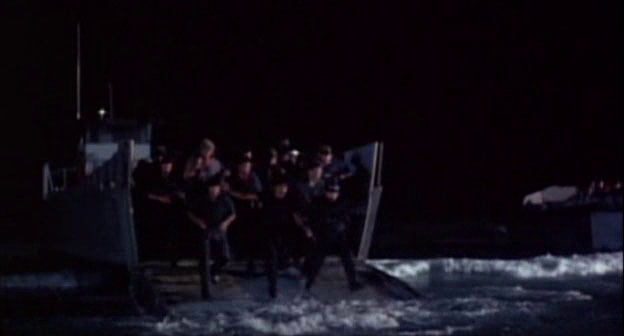 But there is one man standing in Rostov’s way that he must kill before he can carry out his plan fully on America: ex-CIA agent, Matt Hunter, (Chuck Norris).  Big mistake! 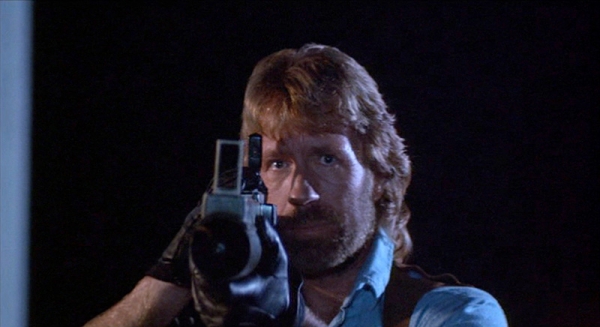 As serious as terrorism is in today’s culture, and the more realistic films we have gotten about the subject over the last several years, Invasion U.S.A. is a rather fun film to watch.  You can indulge in a ‘what-if scenario’ there was a guy like Matt Hunter out there going around cowboy-style protecting the innocent from the bad guys with no one to reign him in.

This is a Cannon film after all.  Cannon films were always meant to be pure entertainment and nothing more – that’s what makes them so AWSOME! Movies like Invasion U.S.A. are meant to be enjoy on a fantasy, escapism level; to watch good overcome evil and not to be taken too literally even if the subject matter is real.

There are a lot of great actions sequences in the film, all done by real people on camera, no CGI here folks. They blow up real houses in a suburban neighborhood, totally destroy a real mall, and drive a pickup truck through a window while a human is hanging off the side – ah 1980s actions films were the best.  The scale and scope of the movie feels big (with only a budget of around 10 to 15 million, director Zito really maximized his money for the screen) and you get the sense that America is being overrun by a group of well-supplied terrorists who will stop at nothing until they see their plan come to fruition. 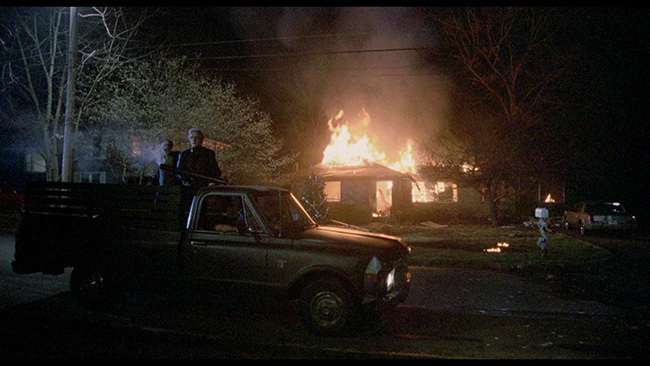 Surprisingly though, Chuck Norris who’s known for his martial arts, does very little hand-to-hand fighting in this movie.  And, out of all of Chuck’s films, Matt Hunter is probably the darkest character he’s ever played. Hunter’s a no nonsense guy who tortures his victims for information, shoots firsts and ask questions later, and doesn’t blink an eye when it comes to taking out the bad guys in the film. 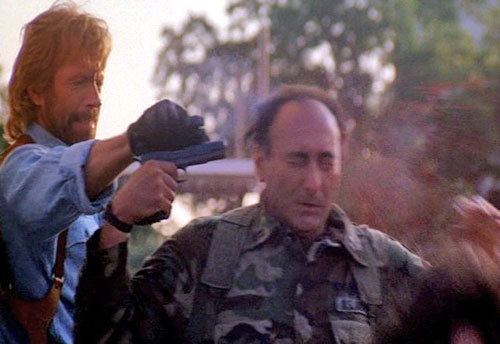 Also Chuck Norris delivers one of the best lines ever captured on celluloid – don’t worry I won’t spoil it here, but it’s worth the price of the Blu-Ray for this line alone. 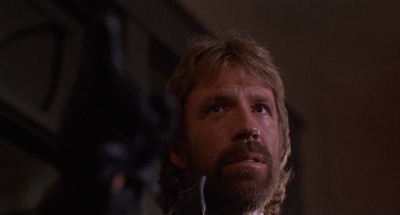 Richard Lynch is cast perfectly as the unhinged Rostov; he chews up every scene he’s in as the ultimate bad guy.  Rostov is such a nasty

dude that he jams a cocaine hooker’s face down into a metal straw as she snorts blow, and shoots not just ONE, but TWO men in the crotch in anger. Priceless! 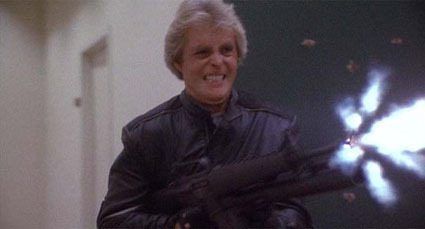 Little known fact: Invasion U.S.A. was going to have a sequel, but when Chuck Norris was uninterested, they reworked the script into Avenging Force (also produced by Cannon) and starred Michael Dudikoff as Matt Hunter.  Though the characters in both movies share the same name, the films have no connection to one other. 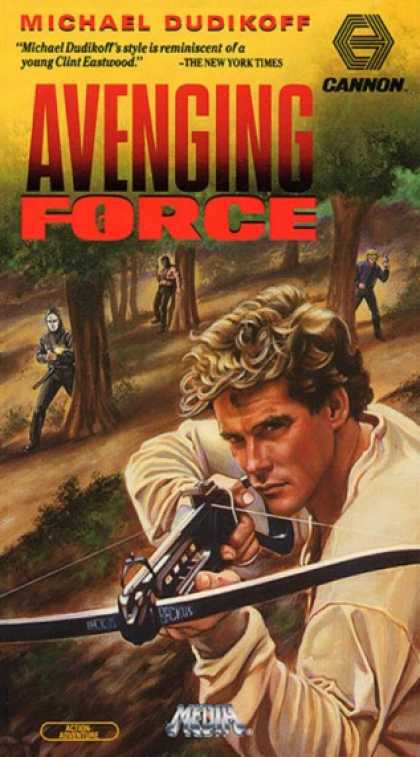 The Blu-Ray transfer looks great in 1080p and the sound in DTS puts you in the middle of the battles and fights.

If you’d like to pick up a copy you can order one here at The Crimson Screen.